The last 24 hours have been way too intense for me. The "Abyss" I'm referring to isn't some realm of outer space nor is it that movie from the 80's...it's my fucking VAG.

- I would suggest reading the following at your own risk. I will not take responsibility for any vomiting or bouts of nausea. -

Late last week I sneezed and felt a sharp pain/pop "down there". I didn't really think to check myself until the following day when I nearly dropped my stupid little compact mirror that I was holding between my legs - I had two HOLES at either end of my incision. I'm talking legit HOLES. My stitches had busted open.

After regaining my mobile functions and no longer hovering over the toilet dry heaving, I frantically called my mother and had her rush over to judge for herself if I looked as horrific as I thought I did. Obviously, something wasn't right and we called the doctor. Of course, we couldn't move up my appointment as much as we wanted to so I had to wait out the weekend/early following week until yesterday, 10/23/13.

I was dreading this appointment. I knew I couldn't stay like that - especially since the holes were barely hanging together by a tiny ass thread of skin. GROSS. I figured my doctor was going to stitch me back together right then and there and I was sooo not looking forward to that. But alas. Silly me actually thought that that would be the worst option. HA! Boy was I fucking wrong.

Rather then be stitched back together, I was instead cut the fuck open. Now, rather then having two smaller holes, I have one giant ass fucking GAPING abyss of a hole where my tumor was. I can't even begin to explain how horribly frightening that/this whole experience was/is.

Of course, now that my hormones are constantly on the warpath, I was already on the verge of a meltdown. Once I was told that a numbing needle was going to be jabbed into the incision area, the rest of the skin was going to be CUT away and the inside of the hole SCRAPED OUT...I was a complete disaster. I mean, is this real life??? Or rather, is this really MY life...?????

Once all the stabbing and snipping and scraping was done, the hole was flushed out with water or saline or whatever the fuck it was, and then a giant wad of gauze was shoved into the hole. Umm...

THEN I was told that every single time I peed, I would need to take out the gauze, flush out the hole with warm water and then fill the hole with new gauze. EVERY SINGLE TIME I PEED.

If I was to describe the size of my bladder I would probably compare it to half of an unshelled peanut. I pee 73 times a day. This was going to be a nightmare.

Aside from not ever wanting to see what this thing looked like, I had the added bonus of being told it would take at least another month to heal. On top of that, I was informed last week that my doctors decided that localized Radiation would be my next course of treatment. In pure Cancer fuckbag fashion, you never know anything until you meet with these doctor's. So basically, I won't know a damn thing about the Radiation until I meet with my now 5th Sloan doctor on 10/29. What I do know is that I won't be able to start Radiation until this thing heals. What I also know is that it will probably complicate my issues down there (sexually, physically, etc.) even more then what I already have to deal with. I can't even take it. That's a whole separate discussion that I definitely won't go into now.

Anyway, after I arrived home after a car ride full of crying and emotional breaking down, I obviously had to pee. This is probably the worse thing I've ever had to do following my battles with this disease...and I've had to do and see enough for a lifetime as it is already.

Having to stick gauze up into a serious open hole in your freakin' VAGINA that's not supposed to be there would make the faint of heart drop dead. And not only do I get the pleasure of having to do this at all, but I have to do it 100 times a fucking day!!! PLUS I have to continue doing this until it heals!

If I didn't throw my hands up in pure disbelief that this is actually the life I have to live I'd probably be strangling myself with them! It just gets "better" and "better".

A full 24 hours have gone by since the whole ordeal went down and every single time I have to change out the gauze I feel sick. It is not a comforting sight to see. Basically, the wound has to heal from the inside, out. How freakin' weird is that? The saline'd gauze apparently helps it heal correctly and reduces the risk of it looking deformed. Clearly, I'm still going to wind up with some sort of concaved area down there. There's no way in hell a hole this size is just going to magically close without any type of defect. The whole thing is just a complete nightmare.

Even if I could live with the hole, and the flushing it out after every urination, and the changing of the gauze, and the deformed vag I'm going to wind up with, and the fact that I now need some dildo-esque Radiation thingamagig therapy...what I do not want to live with is the overwhelming sense of being stuck. Now I'm stuck here, barely being able to move and walk around the house, let alone venture out into the wilderness for who knows how freaking long...on top of not being able to roll around in the sheets for an undetermined amount of time. Translating into what will seem like a goddamn eternity.

Aside from AAALLLLLLL of that, my boyfriend and I have been building a house in West Virginia and I'm missing all of it. This whole thing couldn't have come at a worse time. He has to be there to work on the house so I will hardly get to see him and I won't be able to see my first house being built and obviously won't be able to help build it. The whole thing just sucks SO bad.

Even after 5 years (almost to the day of my first vag surgery at Sloan 5 years ago - 10/14/08 and now 10/8/13...ha...) I cannot get used to or even ever seem to wrap my head around the fact that this is my life. It's just ridiculous! I'm either going to wind up barreling down the road of insanity or something is going to have to give. I guess for now the only thing that's going to give is myself, giving myself new wads of gauze every half hour...for the next month...grreeeaaaattt...

It Was Nice to be Cancer Free...

Today marks one week since my latest surgery on October 8th. Lucky me, on September 17th, 2013 I found another hard mass while I was checking myself in the shower. It was back in my freakin vag. UNFUCKINGREAL.

So, I went through the I-wanna-stab-myself-in-the-face-with-a-fork process of tests and doctor appointments and probing and prodding and all that jazz. My tests were September 24th. When we didn't hear from my oncologist, we figured the news wasn't great but my mom called her on 9/25 anyway just to check, we received amazing news. She stated that I showed no sign of disease anywhere...including my lungs. There was just a note as to where scar tissue appeared due to prior surgery.

My mom called me crying and said there was nothing on my scans. It was a great feeling. But I still had an appointment with my original Sloan doctor on 9/26 just to check what the mass was. Obviously, he felt something and informed that this would be an easy surgery, that it was only about the size of a pea and could be removed in 10 minutes or so. We asked why there was something there when my scans came back clear. He stated that since the vag has a lot of folds and whatnot, that it's hard to tell if anything is there. Great. I was then scheduled for my third (to date) vaginal surgery on Tues, 10/8. 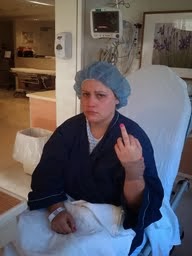 Surgery came and went and luckily I was scheduled to be at the hospital at 8:15am, so at least it wasn't a super late procedure and I was able to leave that evening. Since then, I have been going through my usual recovery process. Since this tumor was more on the outside rather then the inside, the week since surgery has been slightly different then my first two vag surgeries. For instance, I can see the area that was operated on this time...and let me tell you, it kind of freaked me out for a solid 5 days or so because the swelling was so crazy.

My next appointment was scheduled for 10/30 with my vag surgeon and 10/31 with my oncologist to discuss possibly trying localized radiation. I was expecting my pathology report to come back positive as LMS but to have clean margins. This would mean that I was technically, Cancer Free.

It was hard for me to accept that I was Cancer Free because I'm always waiting for the other shoe to drop and something happen. But at the same time, I definitely felt some sort of relief just knowing that there weren't any masses in my body. It was a good feeling.

Today, my parents informed me that my pathology reports came back, and my margins tested positive for Cancer cells.

I still have Cancer.

Being that I have never had this happen in the 5+ years since I was diagnosed, it is a scary thing. My doctor removed the area he could in order to not deform me. If I had to have another surgery, I would absolutely be deformed and disfigured - and that could legit mean a million things. Great.

They won't have an answer as to what they plan on doing this time until Thursday when they have their weekly meeting with all the doctors. I won't know anything for another two or more days. That's always fun - waiting. My doctor stated that he wasn't leaning towards another surgery so who knows what it's going to be. Radiation, chemo, who knows anymore.

Naturally, I feel like when it comes to my health, I am always waiting for something to happen...because now it just seems like something always does happen. It blows. Trying to be positive when all that seems to keep happening are crappy things is super difficult. I guess all I can do is take it one day at a time and just try to live in the moment. It's not easy.

Erin
I decided to start this blog in hopes that young people with Cancer could find an outlet and comfort in knowing they are not alone. Even when dealing with this terrible disease, there are still many good aspects to life. There are days when you feel like you want it to be your last and days when you are ready to take on the world. Everything you’re feeling is normal and I hope that people can still find the simple humor and joy out of life.